All Books and Monographs by WMU Authors 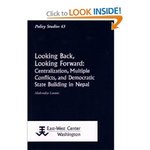 This study examines the causes of the multiple conflicts and crises in Nepal during the 1990-2002 democratic period and develops guidelines to avoid them in the future. In that democratic period, Nepal was extremely centralized, with power concentrated in the cabinet and accessed primarily by the caste hill Hindu elite males. Overcentralization of the polity resulted in the exclusion of national, ethnic, and caste groups, as well as women, and promoted a culture of impunity. It also contributed to the growth of the Maoist insurgency and facilitated government instability, corruption, and related crises. The democratic period, however, also witnessed successful sectors. The media flourished; communities reforested the hills; economic liberalization made available more goods and services; decentralization, though limited, took power closer to the people; and social justice movements raised issues of marginalized groups. The successful sectors could perform because the central state withdrew and allowed them space to operate. However, weak accountability limited their success. Devolution or concentration of power in the hands of the central government were the respective common factors underscoring the success or failure of programs. Based on these findings, and supplemented by global experience, the monograph argues that accountability and inclusion based on identity and class should be significant criteria in restructuring the state. The state needs to devolve power to different levels, branches, and agencies of government, to different national, ethnic, caste groups, and women, and reallocate power among the state, society, and market. Accountability mechanisms must be built into all organizations that wield power. A restructured state would become effective and have a greater chance of consolidating democracy. This is the forty-third publication in Policy Studies, a peer-reviewed East-West Center Washington series that presents scholarly analysis of key contemporary domestic and international political, economic, and strategic issues affecting Asia in a policy relevant manner.

Find in your library