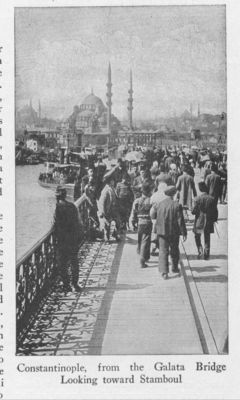 This photograph shows the city of Stamboul, including the Hagia Sophia, from the Galata Bridge. The Turks marched British prisoners captured at Gallipoli across this bridge in November 1915 to celebrate their victory against the failed Anglo-French assault on the Turkish Straits. Under international law, POWs were not to be used for such propaganda purposes.