German Cartoon of the British Surrender at Kut-al-Amara 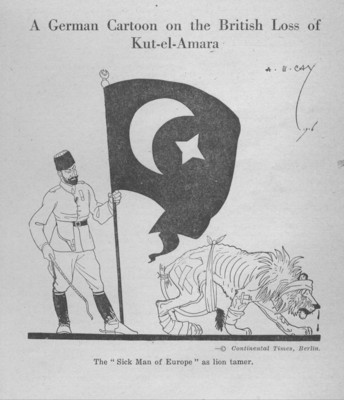 The Germans enjoyed the British surrender to their Turkish allies at Kut-al-Amara in April 1916. This cartoon shows a Turkish soldier holding a triumphant Turkish flag, while a wounded British lion limps away in bandages. The Turk is depicted as the "lion tamer," reflecting the second major British deferat in the Near East (after the Gallipoli debacle ended in January).