View from a Cell at Marmosa-Sziget 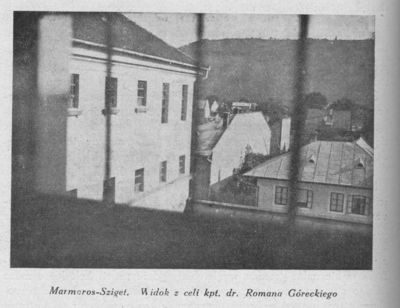 Josef Pilsudski and the Polish Legion fought against the Russians to liberate Russian Poland from tsarist rule. The Polish Legion supported the Austro-Hungarians for the establishment of an independent Polish state. When the Germans and Austro-Hungarians announced the creation of the Council of Regency to rule Poland, Pilsudski rejected the policy and he, with many of his legionnaires, went to prison. This photograph shows the view from a barred cell window, which looks out on the side of the prison at Marmosa-Sziget, part of the town, and the mountains in the background.