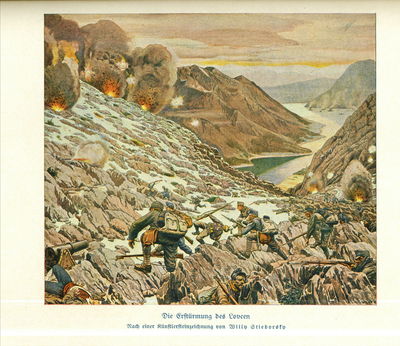 This color drawing shows an Austro-Hungarian infantry assault on Montenegrin positions on Mount Lovcen in January 1916. The Austrians sought to capture the fort at Kouk at the top of this mountain, which defended the kingdom's port at Cattaro. At dawn, 500 Austrian artillery pieces and the guns of the Austrian warships in the bay launched the barrage. After two days of shelling, the Montenegrins fell back to the capital, at Cetinje, and the Montenegrin commander-in-chief, General Radomir Vesovic, surrendered his army on 17 January 1916.