Russian POWs Pass through Berlin to a Prison Camp 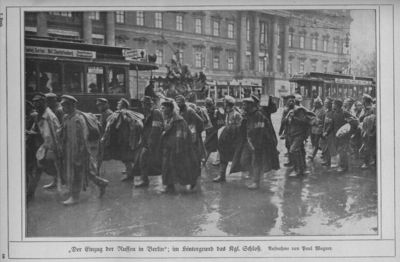 Russian prisoners of war march past the Royal Palace through the streets of Berlin, probably in the process of changing trains for their prison camp assignments. Civilians on the street cars watch the Russian parade. The German caption for the photograph, "Russian Entry into Berlin," was intended to point the irony that a Russian invasion consisted of millions of Russians captured by the Germans on the Eastern Front.