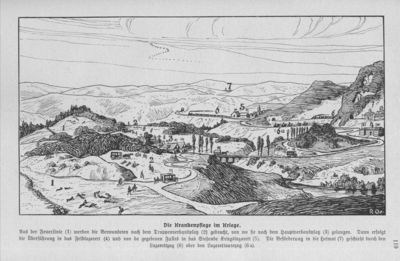 This diagram depicts how the German army cared for wounded soldiers during World War I. Troops wounded on the firing line (1) or in the trenches received first aid at the Truppenverbandplatz (2). After an initial diagnosis, the wounded would travel by ambulance (automobile or horse-driven) to the (3) Hauptverbandplatz, a medical facility close to the front lines where the wounded would receive more intensive care. The doctors would transfer seriously wounded to the (4) Feldlazarette, which was further behind the lines. The most seriously wounded or permanently wounded troops would travel to the (5) Kriegslazarette, hospitals located in Germany by (6A) special hospital trains (Lazarettzug) or by (6B) ambulance (Lazarettauto). Seriously wounded prisoners would be discharged or allowed to convalesce at (7) home until they could return to duty. Allied wounded followed the same procedure for treatment, except that seriously wounded POW's might have been repatriated to neutral Switzerland or Holland to recover from their wounds.