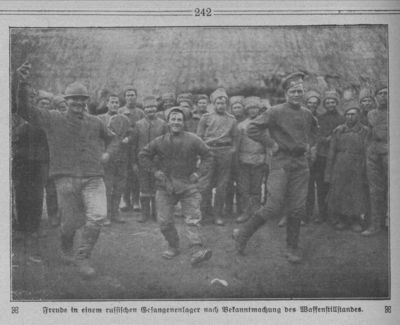 A group of Russian prisoners rejoice upon hearing the news that the Bolshevik government had signed the Treaty of Brest-Litovsk in March 1918, which ended the war on the Eastern Front. Amid the dancing, one Russian prisoner wears a French helmet (at the left). They would soon realize that while the war had ended with the Germans, the Russian Civil War would delay their departure from Germany for as long as five years.