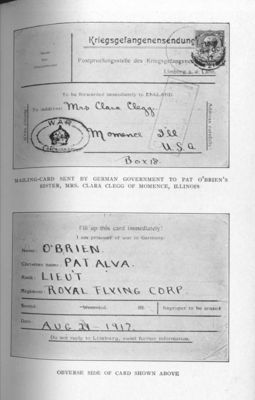 After capture, German prison camp administrators sent a post card with limited information (indicating whether the prisoner was sound, wounded, or ill) to a relative. Normally, such correspondence would have traveled post free through the international mails, but this post card received a British stamp when the card was forwarded from London to Illinois. The prisoner was an American volunteer in the Royal Flying Corps. Note the card originated at the prison camp at Limburg-an-der-Lahn and the addressee is instructed not to write back to the prisoner at that site. Limburg was a Durchgangslager (transfer camp) and some POW's remained at Limburg for only a short time before transfer to a permanent camp (Stammlager).﻿