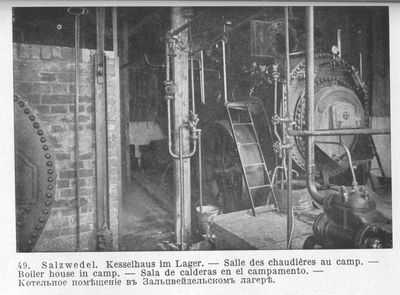 This is the boiler room in the prison camp at Salzwedel which generated steam for the facility. Prison camps became large towns almost over night as the war dragged on and millions of Allied prisoners streamed into the empire. The POW population became a much greater drain on resources than anticipated in German pre-war planning strategy. The boiler room provided electricity for the camp, including lights for security, and hot water for baths and showers, which was the key to hygiene in crowded prison camps.