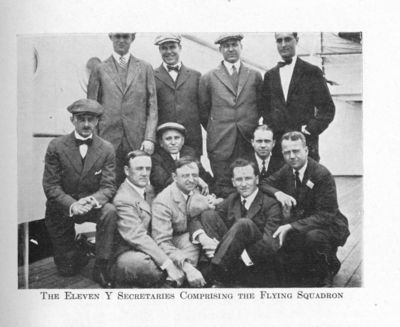 This is a photograph of the "Flying Squadron," American volunteers who answered John R. Mott's call for men to serve in the prison camps of Europe in the Summer of 1915. They were known as the "second contingent," following in the footsteps of Archibald Harte and C. V. Hibbard to establish the War Prisoners' Aid service. The eleven are on board the deck of a ship in the middle of the Atlantic, preparing to offer aid to young men in prison camps and hospitals.