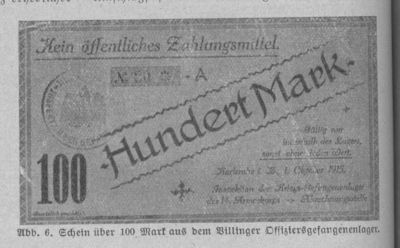 While enlisted men rarely had much money in prison camps, officers were in another class altogether. This 100-Mark bill came from the officers' prison camp at Villingen and, as stated on the front of the bill, it was valid only in the prison camp. The currency was issued by the XIV Army Corps in Karlsruhe in October 1915 and had the official stamp of the Ministry of War. This was a considerable amount of money and German authorities had to be careful that this money did not end up in the unofficial black market purchasing contraband nor used for an escape attempt.